Health is primordial for the development of any society. A majority of health centers in Cameroon face severe challenges. They are either understaffed or have unqualified staff, and a majority of the health centers lack basic health equipment and appropriate health infrastructure.

On the 17th of October 2016 some four communities kevu in oku sub division Bui division; Yer in jakiri sub division Bui division, Benade in the Benade sub division Menchum valley division and Benabinge in the  Benakuma sub division Menchum valley division  in the North West Region of Cameroon benefitted from this program and the student nurses WOSUIJI THECKLA KINYUY,ISEH RITA YAOUNBO, MBIBEE BERNIS and ONGUN KARAMA FREDERICK chosen by these communities respectively are to be trained as state registered Nurses for three years and will in tend work in their communities for at least three years on graduation. These beneficiaries went home with joy in their hearts as their dreams of becoming medical personnel are gradually coming to fruition thanks to SHUMAS and partner the UK based charity Spreading Health. To this effects the three parties signed a protocol agreement stating the obligations of each of the parties with SHUMAS as sponsor, the communities as primary beneficiaries and the student nurses to be trained as secondary beneficiaries. 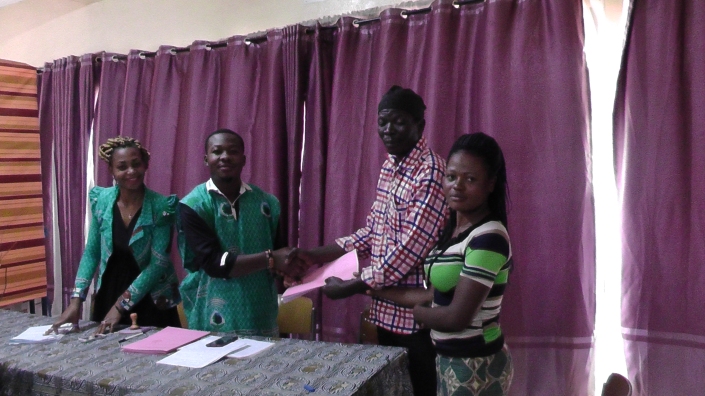 During the protocol signing which took place in the SHUMAS head office at Mile 6 Nkwen, Bamenda, the different candidates were accompanied by the Chairperson of the Management Committee of the Health Center and the Chief of the Health Center who together were representing the different primary beneficiaries. Both Primary and secondary beneficiaries left signing praises to SHUMAS to coming to their aid.

This entry was posted in Non classé.